LONDON–(BUSINESS WIRE/AETOSWire)-– The Universal Peace Federation (UPF) is announcing that a second global Rally of Hope will be held this weekend, featuring world leaders who see new opportunities for peacebuilding in all sectors of society. 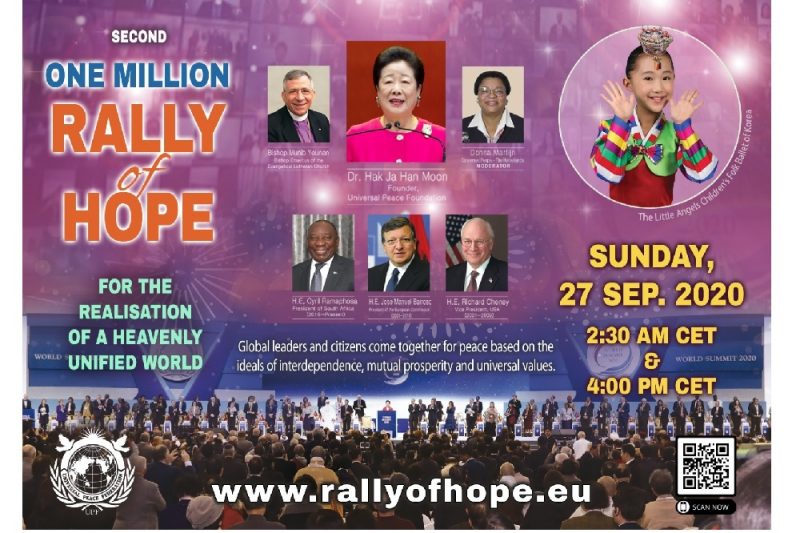 These messages and entertainment, including uplifting performances by the Little Angels Folk Ballet of Korea, will be broadcast live using augmented reality technology in a 90-minute program from Cheongshim Peace World Center in Korea.

Dedicated links for broadcast media will be available at https://www.peacelink.live/bc from Friday, September 25, 2020.

European coverage will be provided at www.rallyofhope.eu on Sunday, 27 September at 0230 and 1600 CET.

The Rally of Hope series are aimed at building a “unified world of lasting peace” around the core ideas of interdependence, mutual prosperity and universal values, said UPF Chairman Dr. Thomas G. Walsh. The first Rally of Hope, held in August, drew several million online viewers from around the world.

The speakers at the August rally featured many heads of state, who addressed a range of issues, including the COVID-19 pandemic, environmental degradation, poverty and race relations, Mr. Walsh said. “But in their own ways and in their own words, they all expressed hope that humankind, as one family under God, has the full potential to resolve all of these issues by working together.”

This weekend’s Rally features seasoned parliamentary leaders discussing the road to a world that embraces the values of freedom, peace, unity and happiness.

“This effort is timely and needed,” says Dr. Michael Balcomb, who leads the Rally of Hope’s European activities. “Many nations are desperately appealing to their own citizens to unite together and work unselfishly to fight against the spread of COVID-19. But at the same time, borders between nations have been closed or restricted, and here in Europe there is a real danger that if we continue to always put our own interests first, European unity could collapse altogether.

“Mother Moon has managed to bring together a line-up of very different speakers, including some who in other times might have openly fought each other. That is a sign of real progress.”