‘The whole world is looking at Fight Island, we’re doing something nobody else is doing’

Abu Dhabi is now the benchmark for global sporting events thanks to its successful and safe hosting of UFC Fight Island™, according to one of the main men tasked with ensuring the fighters are safe during their bouts in the Octagon.

Yas Island is currently hosting Return to Fight Island, a mega five-event series hot on the heels of the July’s inaugural UFC Fight Island™. Having already staged UFC® 253 and one UFC Fight Night, the packed schedule includes two more UFC Fight Nights, before reaching a crescendo with UFC 254 and the return of fan favourite Khabib Nurmagomedov.

Experienced MMA referee Kevin Sataki, has been in the Octagon for several bouts during the first two events of the Return to Fight Island schedule and believes the rest of the world will be looking to learn from Abu Dhabi when it comes to hosting live events. Indeed, the UAE capital is preparing to welcome the return of Formula 1 in December while the Indian Premier League (IPL) is currently taking place in Abu Dhabi and the UAE. 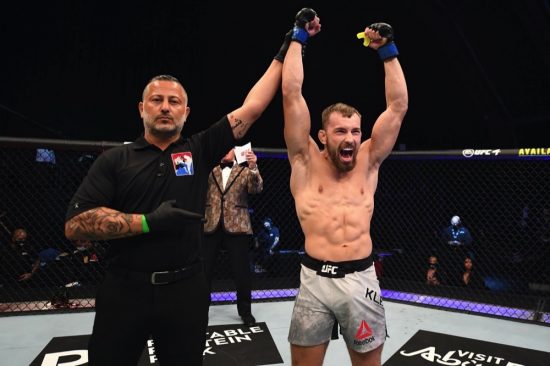 “The whole world is looking at us now. We’re doing something that nobody else is doing. When people see this, sports that are not active are going to be saying they’re doing it really well, let’s go there,” said the UFC referee, from Sweden.

“I would recommend it. Especially the way Abu Dhabi, the people, have been taking care of us. The hospitality is second to none. It is special. All the sports should come here right now. All the athletes that want to be active, if they’re not active, they don’t feel well, they’re not happy, bring them all over here!”

“There are no other sports doing this. It’s very natural. It is getting bigger and bigger and everything is so smooth. So why not do it bigger and longer? It’s one of the reasons we’re coming back. Everybody is happy and everybody is satisfied. UFC and Abu Dhabi is taking care of us so it is perfect.

The innovative UFC Fight Island safe zone, an enclosed 6km² area of Yas Island has ensured the health and safety of more than 2,500 people including referees, fighters, coaches and event personnel, with regular testing and safety guidelines such as the wearing of masks and social distancing.

Being kept safe, with their health and wellbeing taken care of, has allowed the fighters, coaches and referees to focus on the job at hand.

It’s an amazing feeling. It is second to none. The security, what we’ve been through, with the quarantine and the experience being here, I couldn’t feel safer, for everyone, for us the officials, the athletes, for you guys, for everyone. It’s an amazing feeling being here,” added Sataki. They are treating us like I’ve never been treated before. It is 10/10. It is very nice, everyone is so nice to us, taking care of us, making sure we’re nice and healthy.”

Spectators maybe the one thing missing from Return to Fight Island and other sporting events but while Sataki admits that live sport needs spectators when it is safe for them to return, Fight Island has a ‘special” feeling.

“Being a referee, we need to concentrate on our jobs, so it doesn’t really matter (whether there are fans in attendance), but for the sport, everybody misses the fans. It is a special feeling doing it this way. I would prefer with spectators, but we have to make sure as a priority that everyone is safe. These are crazy times and doing it like this is a good thing so the sport can continue.”