Brazilian fighter took to the stage at UFC FIGHT NIGHT: MORAES VS SANDHAGEN face-offs with face painted as DC Comics villain The Joker

Markus Perez may have stolen the show at this weekend’s pre-fight weigh-ins ahead of UFC FIGHT NIGHT: MORAES VS SANDHAGEN when he squared up to opponent Dricus Du Plessis with his face painted as comic book villain The Joker, but he promises his Return to Fight Island performance and approach to UFC are no laughing matter. 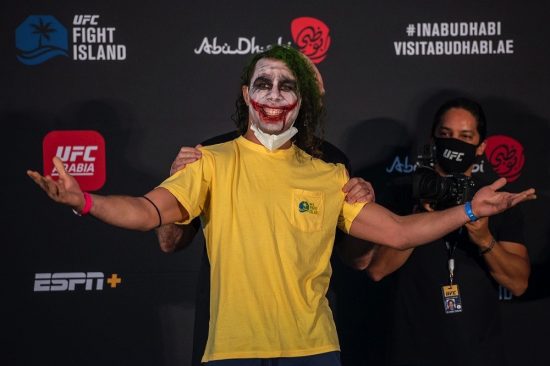 The charismatic Brazilian faces South Africa’s Du Plessis in a middleweight bout at Flash Forum in Abu Dhabi early on Sunday morning in the fourth fight on the main card.

In the minutes between Friday’s weigh-ins and face-offs, Perez changed his appearance, painting his face and colouring his hair to look like the DC Comics character The Joker, which has become something of a trademark for the man with 12 UFC wins to his name. However, Perez insists his act is not about trying to intimidate his adversaries, rather a way for him to focus on his own game plan.

“I don’t put all this effort in and put on the face paint to intimidate my opponents. I do it because I identify with The Joker. The Joker isn’t about intimidation. If you read the DC Comics, he doesn’t stand out because of money or any superpowers, he stands out because of his intelligence,” insists Perez.

“And I can relate to that. I like to use my intelligence, before and during a fight. You will see that from me in Octagon. I don’t have superpowers, but I fight intelligently, and it feels good.”