Saudi Arabia’s top driver Yazeed Al Rajhi and new FIM world bikes champion Matthias Walkner have both set their sights on a maiden victory in the Abu Dhabi Desert Challenge when the event marks its 30th anniversary next week.

Partnered by British co-driver Michael Orr in a Toyota Hilux Overdrive, Al Rajhi is aiming for a second triumph in the UAE this year after the pair combined to win the Dubai International Baja back in February.

Austrian KTM star Walkner, who secured this year’s FIM Cross-Country Rallies World Championship with second place in Morocco last month, hopes to go one better as the 2021 series reaches its conclusion in the UAE.

The Emirates Motorsports Organization today announced the international entry list for the 2021 Abu Dhabi Desert Challenge, which gets under way in the UAE capital next Saturday with the drivers’ title in the FIA World Cup for Cross Country Rallies hanging in the balance.

Qatar’s Nasser Al-Attiyah (61pts), who pursues a third Desert Challenge success, will be up against his three remaining title rivals in Al Rajhi (44pts), Argentinian Lucio Alvarez (42pts) and Russian Denis Krotov (37.5pts) in the penultimate World Cup round.

Over the years, Yahya Al Helei has often out performed some of the world’s top drivers in his home event, and the Emirati, remarkably, starts his 30th consecutive Abu Dhabi Desert Challenge alongside Khalid Al Kendi in a Nissan Pick up.

With the final World Cup round remaining in Saudi Arabia next month, two other FIA titles will be in the balance during Abu Dhabi Desert Challenge, and rally founder Mohammed Ben Sulayem anticipates another fiercely competitive five days of action on the Al Dhafra desert stages.

“There is always a lot at stake in this event, and the fact that we’ve reached our 30th edition adds to the appeal of the rally,” said Ben Sulayem, President of the Emirates Motorsports Organization and FIA Vice President for Sport. “It’s a memorable occasion for everyone taking part, from the top competitors to the many volunteers who help to make it happen.” 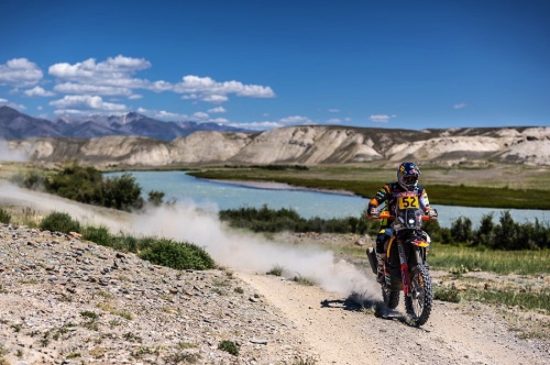 It’s a similar story in the FIA T4 category, with World Cup leader Austin Jones from the US looking to fight off Dutchman Kees Koolen, Italy’s Eugenio Amos and Poland’s Aron Domzala, the top four all at the wheel of Can-Am Mavericks.

Among the leading Arab riders relishing another chance to rival the top factory team stars are the UAE’s Mohammed Al Balooshi, winner of the 2018 FIM Bajas World Cup who has just finished fourth this year, Kuwait’s Shatti Abdullah and Saudi’s Alghuneim Mishal.

Italian Carlo Cabini starts the event on a Honda leading both the FIM Rally 2 Group 1 standings as well as the Adventure Trophy category for riders competing without any assistance.

Meanwhile, Poland’s multiple world quads champion Rafal Sonik must fight off Argentina’s Manuel Andujar, his big rival in this year’s FIM title race, if he is to record a third Desert Challenge victory.

Competing in the event for the first time in the FIM SSV category are two Israeli crews, Roy Bartov alongside Guy Roy, and Tal and David Galimidi, in a pair of Can-Am Maverick X3s.

2021-11-09
Previous Post: ADIPEC 2021 to Address Challenges of Diversity, Equity and Inclusion in the Energy Sector
Next Post: Hira Industries Breaks Ground for the Expansion of its RAKEZ Manufacturing Base Ras Al Khaimah, United Arab Emirates